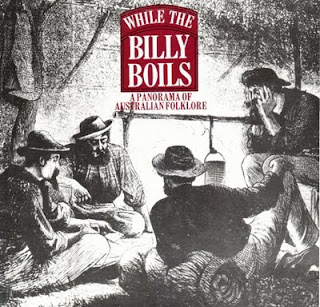 Featuring various artists, this is a Larrikin 1981 two LP compilation (LRD 9012) containing 30 tracks of traditional and contemporary Australian Folk songs and two instrumentals.
I presume this album was marketed to benefit from the Warren Fahey scripted ABC radio series "While the Billy Boils" as it also carries the ABC Logo on the rear of the LP slip.
It is a great compilation unfortunately marred to some degree by varying sound levels, not only between tracks, but also within individual tracks.  I have improved the problem with the different album sound levels but some downloaders might prefer to "normalise' some of the tracks (I am definitely not a fan of "normalising" but I could understand its use in a couple of these tracks).

Link failed? Then please leave a comment or contact mr.stockman@gmail.com
Posted by Paul the Stockman at 12:27 AM