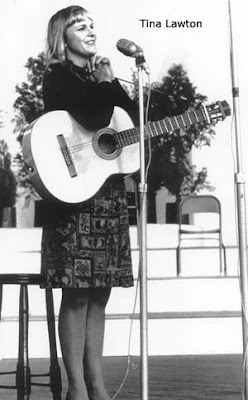 We have rather a good Christmas present facilitated by Michael of Adelaide. Many, many thanks!

In 1965, the ABC Adelaide produced a number of 10 minute fillers entitled "The Tina Lawton Interludes" which were broadcast nationally on ABC TV in popular time slots.

The ABC provided Tina with audio of the tracks featured in these Interludes and she provided copies to a limited number of friends including Michael's family. Michael has provided a rip of the cassette in his possession. Obviously the quality is what should be expected of 1965 TV audio and cassette tape technology (just three years old) but, with a little cleaning, the tracks have come up a good listening standard.

Now, if only some kind soul with ABC access could locate the original TV films?? Anyone? What a prize that would be.

You will notice that some of these tracks feature on her three albums previously posted. The ones I checked are different performances.

Commence downloading compressed file by clicking here. 65Mb. MP3 VBR 224-256.
Let Mr.Stockman@gmail.com know if download no longer available and I will put it back up.
Posted by Paul the Stockman at 3:58 PM