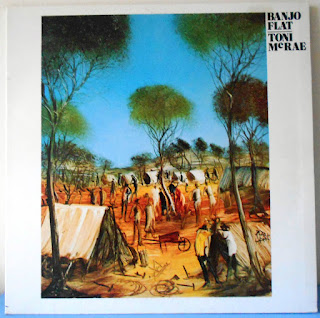 A friend (who prefers to remain nameless) provided me with .wav files of the tracks of this album which he had sourced from elsewhere.

The original source material had a high level of clicks and pops and had been recorded at slightly too high an input volume leading to some clipping. Nevertheless, the tracks have cleaned fairly well and the clipping is not overtly intrusive.

This is an interesting album - a sort of 1975 anthem to Australia mainly featuring (then) modern material and themes - both good and bad. Toni McRae's performance is of a high quality enhanced both chorally and instrumentally by some top-notch performers.  The line-up was:-

My favourite is "On the Night Train" - I am certain that Henry Lawson would have approved. I have no proper graphics and have included some files used on eBay and a stop-gap measure - anyone able to help?


Click here to commence downloading the compressed album file (ZIP file)
File is 53Mb and must be decompressed before playing. Tracks are MP3 @ 224VBR.
If download fails, let me know by, preferably email to mr.stockman@gmail.com, or by comment on this posting.
Posted by Paul the Stockman at 11:48 PM