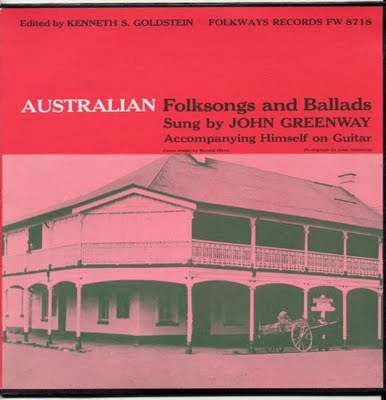 John Greenway was born in England in 1919.  As a young man, he went to the USA where after serving in the US Army in the Second World War, he furthered his tertiary education eventually becoming an English teacher and subsequently an anthropologist. Early on, he was strongly leftist with an interest in songs of protest and labour songs reflected in his records and publications.  In 1956, he was awarded a Fulbright scholarshop to study Australian labour movement songs.  He also undertook field work with traditional aboriginals.  He viewed the aboriginal research very positively but he "became so disgusted with the abuses and power of the Australian labor movement" that he became a "rightist" which well accounts for why, when he put out this album of Australian folksongs in 1959, not one union or protest song was included.
He has a fairly easygoing singing style and the American accent and the occasional mispronounciation of "Gundagai" gets a bit in the way but at least he had the dog sitting in the tucker box rather than on it but then in 1959 he'd have had his LP banned if he'd have sung "shat in the tucker box".
Unsurprisingly, most of the songs are in the usual top thirty of Australian folksongs. The tracks are:-
Botany Bay, Old Bullock Dray, Dying Stockman, One of the Has-Beens, Brisbane Ladies, Castlereagh River, Click go the Shears, Bold Jack Donahue, Wild Colonial Boy, Waltzing Matilda (original), The Dog sat on the Tuckerbox, Lazy Harry's, Ben Hall, Wallaby Stew, Les Darcy, Stockman's Last Bed, Peter Clarke, Cockies of Bungaree, and Wild Rover No More.

By courtesy of the combined efforts of Donnatv and cianfulli (see comments) a PDF of the original LP graphics can be obtained here.  Thanks very much.
Posted by Paul the Stockman at 10:45 PM