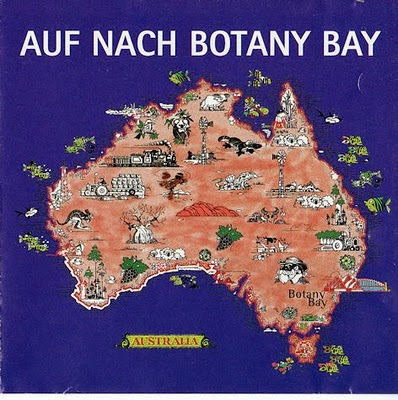 We have previously featured some tracks from this CD but, thanks to a friend, I have obtained the CD so as to post it with all tracks and graphics advising details of the artists involved.

As previously advised this CD was fully intended as a German language teaching aid for NSW schools.  The songs are firstly introduced in English then sung in English and then a German version is sung with the exception of the final song which is a medley of English and German.

Home Rule is the competent Australian group providing the musical backing and the Enlish language versions.  Günther Pösterl and Klaus Knipp sing the German versions.  The songs are mostly Australian traditionals with the exception of the more modern folk song of known authorship, namely "Sergeant Small", and the commercial song "Big Ben Pie".  The traditional lullaby "Little Fishes" has been adopted to include modern ecological messages.  For some unknown reason, they have absurdly substituted Charters Towers for Charleville as the starting point in Sergeant Small.  Charters Towers is on the Townsville to Mt Isa railway line and is a long, long way from being on the Brisbane to Cunnamulla railway line through Charleville, Mitchell and Roma.

Sergeant Small aka Down and Outback may not be so well known.  Sergeant Small was a well-known police officer stationed at Roma in south-west Queensland.  In the depression years, many men on the dole were obliged to travel the country searching for work as they had to collect their dole from different locations.  With virtually no money, there were really only two ways to effect this travel - by walking or jumping a freight train.  The railways tended to resent the second option and there was a constant effort by both the state police and the railway police to deter these free traveling swagmen or bagmen as they were sometimes called.  Their usual technique was to intermittently board and comprehensively search trains.  Sometimes the swagmen were arrested and other times they would be forced off the train in remote areas.

Sergeant Small developed a cunning approach.  He would kit himself out as a bagman trying to find some space on a goods train for himself and he'd surreptitiously approach each carriage and ask if there was any room inside and many a concealed bagman would answer back and thus give himself up.

Song tracks are VBR in the 190s and the spoken introductions are at 128 - Graphics included.