The Overlanders "songs of the Great Australian Balladists" 2LP set 1978 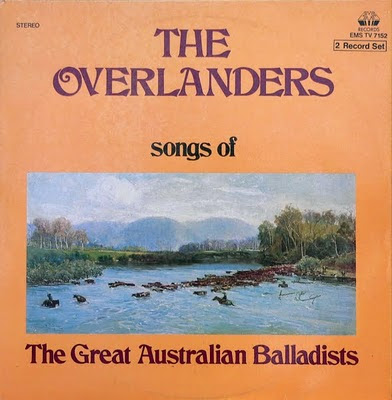 We have met this South Australian group The Overlanders before with their LP Tribute to Western Australia 150 (1979). This two LP set of 36 songs was released in 1978 and, instead of offering the usual top 30 of Australian folk songs, refreshingly contains many bush songs often neglected by others.

Graham Jenkin, school teacher, folklorist and author, was the moving force behind this project which also included the publication of an identically-named companion book (second edition 1983). He had previously been the co-author with Lionel Long of Favourite Australian Bush Songs in 1964.

The singing is sometimes a little ordinary but we need to be grateful that this group put together such a great collection of the more obscure Australian folk songs.

I have now fully rebuilt my home network (insurers came to the rescue albeit slowly) after the lightning strike in mid-January so the blog has become a little neglected.  I hope to soon rectify that so I am very grateful to Ian of Adelaide for kindly ripping and providing this entertaining album.  Many thanks Ian for a great rip @256kps!  Contributions are always welcome.

Link failed? Then please leave a comment or contact mr.stockman@gmail.com
Posted by Paul the Stockman at 7:36 AM