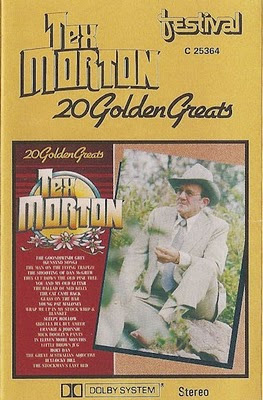 Tex Morton (1916-1983) was a New Zealander by birth and an Australian by adoption reportedly arriving in Australia at the age of 16 in 1932.  He was to become a gifted showman variously performing as a singer, hypnotist, sharpshooter and whip cracker  in various countries including lengthy stints in Canada and the United States of America.

He is best known in Australia as a singer and is accepted as being the "Father of Australian Country Music" paving the way for such later greats as Slim Dusty and Buddy Williams.  He was first commercially recorded in 1936 for the Regal Zonophone label and his subsequent output included scores of the old 78rpm records. He always sung with an American accent and initially his song tracks were American songs or at the very least passed off as American songs using the then standard American country music terms, e.g. outlaw, prairie, but over the years his music did become more Australianised.  Basically, in his prime he was a typical "hillbilly" singer given to lots of yodelling.

His singing style was distinctly out-of-fashion from the 1960s onwards but, in 1973, he recorded "The Goondiwindi Grey" about the legendary racehorse Gunsynd with great success.  This created considerable general interest in his music and resulted in the release of a number of compilations of his music.  In his later years, his contributions to Australian country music were often publicly acknowledged and he was a regular guest at the Australian Country Music Awards at Tamworth.
This particular compilation tended towards general music tastes of the 1970s and thus does not include any yodelling tracks and focuses more on Australian based material and comedy (he was a great comedy singer albeit in a country style).  Some of the tracks are recitations which he performs with great distinction.  His music may now sound rather unsophisticated and basic but, for his time, he was an outstanding performer.

Be warned that, although this compilation features traditional items - Bullocky Bill, The Stockman's Last Bed,  Holy Dan, and The Dying Stockman, he may offend those of you who are folk purists.  I am not presenting this album as being "folk" but to provide some insights into the music leading up to the later bush balladeers.

Some discerning readers may note that the cassette is presented as being Dolby Stereo and I've provided mono rips - that's because it was not really stereo.

Link failed? Then please leave a comment or contact mr.stockman@gmail.com
Posted by Paul the Stockman at 5:11 PM