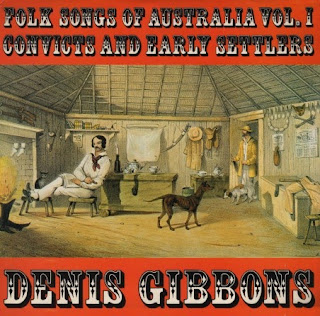 This was the first LP in Denis Gibbons three-part "Folk Songs of Australia" series (Volume 3 has recently been posted on this blog).  This particular LP is a stereo version copied by Brendan of Tasmania and subsequently 'cleaned' by me  Many thanks Brendan.
Most of the tracks are the regular standards but there are also two rarer songs, namely, The Last Farewell to Stirling and The Catalpa. Other tracks are Botany Bay, Jim Jones, Bold Jack Donohue, Black Velvet Band, Old Bullock Dray, Wild Rover, Drover's Dream, Andy's Gone with Cattle, Old Bark Hut, and Wallaby Stew.
An interesting point that I perhaps should have raised far earlier is that of so many of our folk songs referring to convicts traveling to, and suffering at, Botany Bay.  The fact is that, although Botany Bay was selected as the intended first site of Australian settlement, on arrival a quick survey identified that it was unsuitable for settlement.  A search of the nearby coast discovered Sydney Harbour and the first fleet quickly moved to the site of modern Sydney and set up camp there. Nowadays, Botany Bay is part of southern suburban Sydney.
Another issue is that some of the convict-related songs make much of the cruelty and deprivation suffered by convicts e.g regular routine beatings, slavery and brutality.  There are exceptions but the far greater majority of convicts were better-off in Australia and many prospered while still "serving" their sentences.  Then, the lower classes in Great Britain suffered considerable hardship and very limited opportunity which is why the crime rate was so high anyway.  Initially, convicts were terrified of transportation to Australia because the Government went to great lengths to portray transportation as a deterrent to crime.  By the early 1800s, sufficient convicts had returned to British Isles and their portrayal of the conditions in the colony markedly lessened the fear of transportation and many convicts would formally request transportation.  Contrary to common belief, convicts of British citizenship were allowed to return to Great Britain after serving their time.  Some did but most opted to remain in Australia settling down to often hard, but far more satisfactory lives compared to their peers in the homeland.

Posted by Paul the Stockman at 4:30 PM