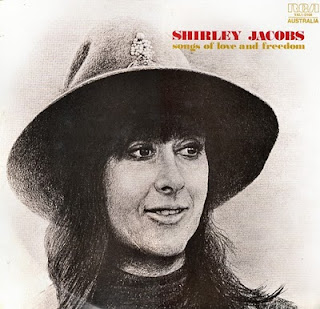 A real eclectic mix this LP featuring Australian traditionals, an early Bob Dylan, a soundtrack, an Australianised  version of Woody Guthrie's  "This Land is your Land", a traditional Scottish song, a song about Australian Rules Football to the tune of Percy Grainger's "English Country Garden", a childhood lost song reminiscent of Rolf Harris's "Two Little Boys", a song about loving through prison bars, three popular songs of the 60s and 70s, and a Henry Lawson poem set to music  - all receiving professional backing occasionally with some great instrumentation spoiled a little by too much woodblock percussion overall.

Shirley Jacobs was a Melbourne folk singer and anti-Vietnam activist and put out at least ten LPs on various labels mainly featuring folk music. I think this one may have been her last LP (anyone know better?) .

With Australia out of Vietnam in December 1972, Shirley went on to become involved with prisoner issues at Pentridge Gaol in Melbourne where she performed regularly eventually falling in love with a prisoner, Ronald "Joey" Hamilton, a painter and docker and prison activist.  The "Love and Freedom" title reflects this situation but only two tracks have any possible relevancy to that theme.  The cover portrait is of a sketch drawn by a prisoner of "B" Division.
Her LPs are somewhat difficult to come by and I'd love to have copies of her early albums. Can anyone help?

Tracks in order are Annie's Song, Ranchin' in the Evenin', Sad-eyed Teddy Bear, Cross of the South (rare traditional), Green Green Grass of Home, Love over the Walls, Cockies of Bungaree, This Land is Your Land (Oz version), Melbourne Football Song, Blowin' in the Wind, Wild Mountain Thyme, Scarlet Ribbons, and Bush Girl.

Link failed? Then please leave a comment or contact mr.stockman@gmail.com
Posted by Paul the Stockman at 9:37 PM