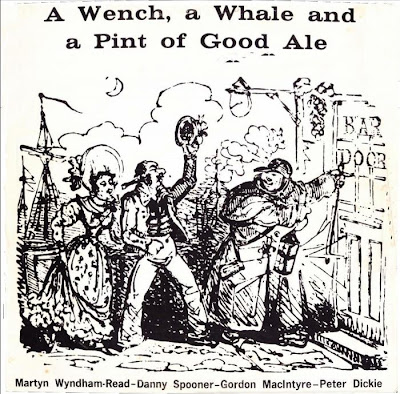 This is the first of the albums that featured Danny Spooner. This time he is again in company with Martyn Wyndham-Read. Additionally, they are joined by another British ex-pat, Gordon MacIntyre. Gordon was very active in the Australian folk scene for many years; sadly passing away in 1999. Peter Dickie is also acknowledged but he is a complete enigma to me. The LP provides no details as to his actual input - can anyone help with some information on him?
This LP is self-statedly intended to provide greater British Isles folk input to the Australian scene which was then strongly influenced by the north American (US and Canadian) folk scene.
Again, we owe thanks to Denis for making and providing a recording of this LP.  There are some minor problem but it has edited well for such an old and well-loved LP.

Download with Graphics (MP3 192-224VBR
From MediaFire
Danny Spooner's widow has advised that plans are currently underway to expand the www.dannyspooner.com website to re-release Danny's music to raise funds for a memorial statue. Accordingly, the album is no longer available for download.

One of our US visitors has kindly pointed out that Peter Dickie is mentioned in Malcolm J Turnbull's history of the Australian folk movement (no - not the pollie Malcolm Turnbull) and you can find the relevant section at this link (click here).

Posted by Paul the Stockman at 6:21 PM