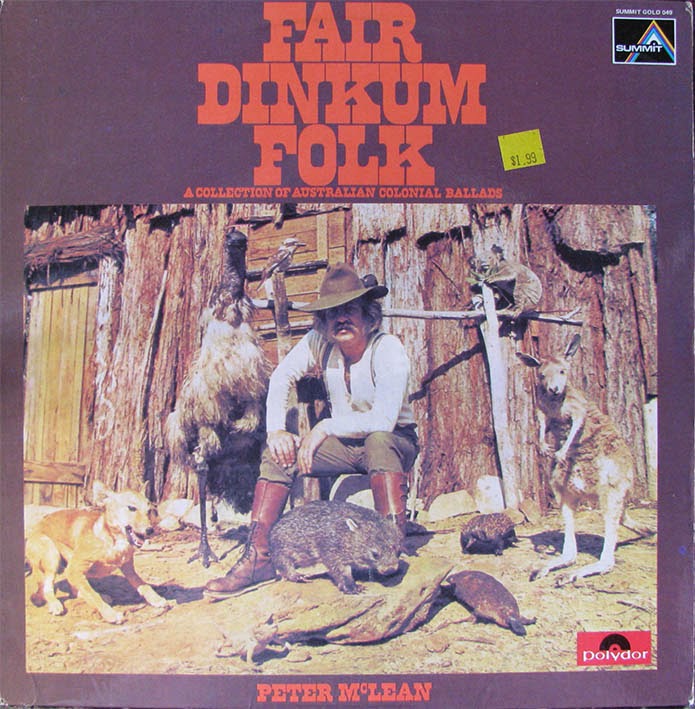 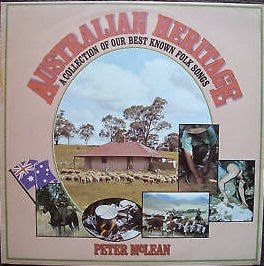 Somebody suggested this artist and album many years ago and I have finally managed to get my hands on it. There were two issues of this album in 1974. I have the first issue (above). It really is an atrocious graphic reminiscent of the USA cover for Burl Ives' Australian Folk Songs album. What a wonderful menagerie of badly-stuffed Australian wildlife. Obviously the distributors had the same view because it was soon re-issued under the title "Australian Heritage" and with far more sophisticated graphics as also shown here. The album remained the same - just different presentation and labelling.

It is a good album. Peter Mclean has a good easy-going, laconic singing style occasionally ably backed by a very good chorus group. Instrumental backing is fairly sophisticated for these songs but is not intrusive (IMHO) - presumably by studio professionals but they are not acknowledged.

The vinyl, considering its age, plays really well and only minimal editing was required. Now, can someone tell us anything about this artist??

Eight of  the tracks are Australian traditionals - the four exceptions are "The Road to Gundagai", "Botany Bay" (from a late-19th Century English play), Waltzing Matilda (it's the standard 1903 Marie Cowan version which, as far as I am aware, never entered the folk tradition - unlike Paterson's original 1895 version) and "Ben Boyd"which was penned by the singer. It's a good song and touches upon how Orcas helped Eden (Twofold Bay) whalers by herding humpback whales so as to share in the takings.

Tracklist:
1. Botany Bay
2. Ten thousand miles away
3. Ben Boyd
4. Tambaroora Gold (a rare but a good one)
5. Mustering Day (another rare one -  "Early in the Morning before the break of day" adaption)
6.  Along the Road to Gundagai
7. Waltzing Matilda
8. The Station Cook
9. Click go the Shears
10. Ladies of Brisbane (a traditional version of Mendelsohn's Brisbane Ladies")
11. Frank Gardiner
12. The Old Bullock Dray (it refers to finding a wife at the "factory" - see last post)

Click here to commence downloading the compressed album. 42MB MP3 @ 224-256 VBR.
Or click here for a FLAC (lossless) version 67MB
Download file will need to be decompressed with 7-Zip, WinRAR, WinZip or equivalent.
Download not available?: Email me - mr.stockman@gmail.com
Posted by Paul the Stockman at 8:29 PM