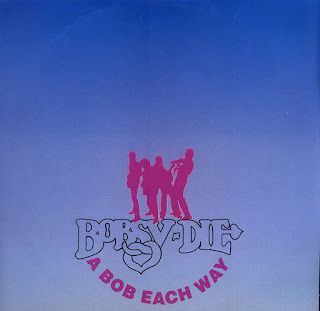 Another offering from the Victorian Bush Folkie. Again many thanks.

"Kick up Bobsy-die" - I had to look it up. New one for me. Interesting, but I think I'll stick with "there'll be hell to pay". But I am familiar with "having two bob each way". Somewhat stretching the theme, the "A" side is "Heads" and the "B" side is "Tails". Perhaps the latter feature is why they did not release on CD!

As far as I know this Victorian-based band which, in 1988, comprised Graeme Akers, Michael Regan, Greg Hunt, and Russell McKenzie, only released this one album (contrary advice very welcome). The "Bobsy-Die Band" does feature on Facebook which identifies that the band was still active in 2014 but the only original member was Graeme Akers.

The album is a mixed offering featuring trad and modern folk and there is also a strong instrumental component. Tracks are of Australian or British Isles origin.

Click here to download album and graphics in one compressed file MP3 @ 224-256 VBR. 43.5 Mb
Let me know if the download becomes unavailable and I will re-up the file,
Posted by Paul the Stockman at 6:28 PM