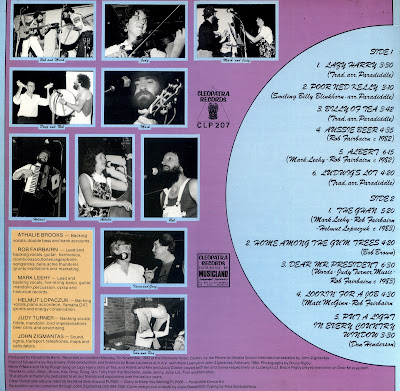 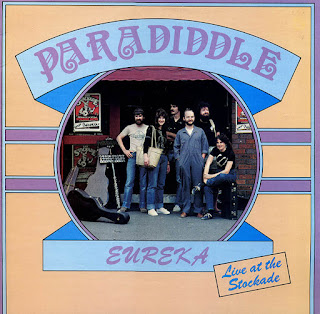 Another album ripped by the Victorian Bush Folkie and cleaned by me.

This is the third Paradiddle album to appear on this Blog. This album was recorded live at the Stockade Hotel in Carlton (an inner suburb of Melbourne) on 7 November 1983. They were a fine group of musicians comprising (alphabetically) Athalie Brooks, Rob Fairbairn, Mark Leehy, Helmut Lopaczuk, Judy Turner and John Zigmantas.

You will be impressed with the instrumental breadth and flexibility of this group. They draw upon a far greater range of music than other folk musicians and they pull it off brilliantly especially in the two tracks given a comedic treatment. "Home among the Gumtrees" is far from standard and there are sections reminiscent of klezmer and calypso. Their vocal performances are great too.

That this album comes from a single night's live performance in a pub is, in my view, astonishing.

Context for Track 5 "Albert" Albert Namatjira, a famed aboriginal artist active from late 1930s to late 1950s, was jailed for 2 months for illegally supplying alcohol to a fellow aboriginal man who then went on to kill an aboriginal woman. Apparently, Albert believed that one of the woman's relatives "pointed the bone" at him (killing by witchcraft) which is believed to have an influence on him.
New Link 5Dec2016

Click here to commence downloading the compressed album file and its graphics
File is 61MB. Tracks are MP3 @224-256VBR
Please let me know if download is no longer available and I will re-up the file.
Posted by Paul the Stockman at 9:00 PM