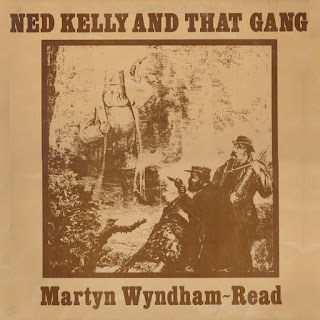 A rip of this particular LP has been circulating on the net for many years in an unedited form. I have now done some editing of the tracks and most have responded well. Some tracks still have some defects but all tracks are pleasant to listen to - just don't listen too critically. I would welcome a cleaner rip though but that is probably a vain hope.

This album was an English issue in 1970. I am unaware as to whether it was ever sold in Australia.

Martyn Wyndham-Read resided in Australia between 1960 and 1967 during which period he became involved in Australian bush music.He has visited Australia several times since then including last month. He is also a performer of folk songs of the British Isles and has put out many albums frequently including Australian folk songs. A great performer who only seems to improve with age. You can find details about him on Wikipedia and his discography on Discogs and other sources.

The title is a bit of a misnomer as Ben Hall and his gang get more play time so it is mainly about two lots of bushrangers with the other tracks being songs about convicts.

Click here to download from MediaFire
MP3 224-256 VBR averaging at 224 (simple music) 58MB.
The downloaded file needs to be decompressed to its album folder and individual tracks.
If download becomes unavailable, please email me at mr.stockman@gmail.com.

Posted by Paul the Stockman at 2:02 PM