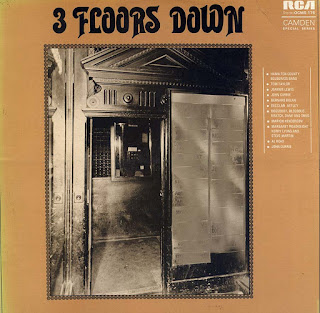 This LP featured artists who associated with the Cellar, three floors down, in the YWCA building in Sydney. This was then the venue for PACT which in 1972 still operated as an adult co-operative theatre and music space. PACT has changed somewhat over the years and is now the "PACT centre for emerging artists" now situate at Erskineville in Sydney.

It is a really mixed offering with psychedelic folk, bluegrass, an Irish traditional, a Spanish language protest song of the 1960s (shades of "Quantanamera"), a blues number, and a few country/folk contemporary numbers.

Many of these artists have featured for other albums on this blog, most notably, Marian Henderson, Declan Affley, and John Currie. All tracks are studio performances.

This is another of the albums ripped by the Victorian Bush Folkie and edited by me. There were a lot of clicks on this LP but most have been eliminated and it is now of good listening quality.

Click here for MediaFire download - MP3 224-256 VBR 48MB
.
The file will need to be decompressed before playing.
Let mr.stockman@gmail.com know if the file is not available for download and I will re-up it.