Declan Affley "The Day the Pub Burned Down" LP 1974 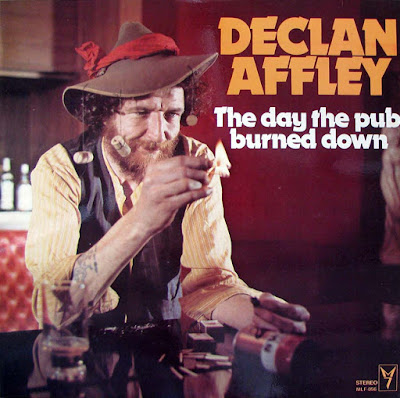 Declan Affley has appeared on several albums previously featured on this blog and here is one of his albums.

Declan became a legend in Australian folk circles but sadly died unexpectedly in 1985. He was born in 1939 in Wales to parents of Irish heritage. He took to music early. He joined the British merchant navy at 16 and jumped ship in Sydney in 1960 then becoming involved in the early folk revival movement here.

Google him if you wish to know more - it will be worth the effort.

This album a fairly eclectic mix of tracks but that was typical of his range of music, songs and poetry.

Tracklist:
1. When Jones's Ale was New (first appeared as an English Broadside in the 1590s and many versions in the folk tradition - this one was collected in Australia)
2. Jug of this (an old English drinking song)
3. Shickered as he can be (Australian collected version of Child 274 - Our Goodman, four nights drunk etc)
4. Jog Along Till Shearing (A classic Australian traditional)
5. Carrickfergus (The very popular Ulster traditional)
6. In a white man's shoe (Australian collected dance tune perhaps deriving from Old Dan Tucker)
7. The day the pub burned down, (A New Zealand song written by a Bob Edwards in 1931).
8. John Barleycorn (A traditional song possibly of great antiquity - several versions but no Australian collected ones to my knowledge)
9. Yellow Bittern (An bunnan bui)  (An Irish drinking song og known authorship)
10. Jolly Farmer (Stated to be probably of English origin)
11. Shanties by the Way (collected in both Australia and New Zealand)
12. Whether or No. (Irish traditional).
13. Hard Tack. A collected song about the rigours of shearing sheep for a generous wine grower.
14. The Lush Land (A Don Henderson composition promoting drinking - written for a competition)

Backing music was provided by Jamie Carlin mainly on concertina, Ken Greenhalgh on flute and whistle, and Don Henderson provided 2nd guitar and chorus backup for "The Lush Land".

Graphics are included in the downloads.

Posted by Paul the Stockman at 5:26 PM