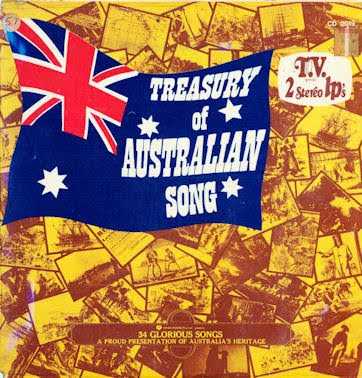 MP3rip@192-224VBR
One of the blog's kind supporters made and sent me .wav files for this very rare two LP set. I am informed that its 34 tracks (32 folk songs, 1 comedy song and one anthem) were recorded in a Sydney studio over three days in 1974 and released on the American "Dyna" label about two weeks later (Serial no. CD2019).
I know that this hasty approach sounds very "rough and ready" but it also captures the true essence of this type of music (along with the occasional cough and side remark). With a couple of exceptions, I have been thoroughly charmed by this double album set and I think many of you will feel exactly the same. Sadly, a couple of the tracks have not cleaned up as well as I would like due probably to some minor damage to one of the LPs but they are still enjoyable. (Correction:- I have later checked a further copy of this album which reveals that the problems in tracks 31 and 34 are identical in both)
Singers appearing on this set are, John Currie, Anne Cochrane, Lee Williams, Kate Delaney, Maureen Cummuskey and Tony Suttor. Additional musical backing was provided by Don Hopkins on harmonica and piano accordion, Tony Suttor on button accordion, Chris Duffy on banjo and mandolin and George Cliff on bush bass. Cliff Atkinson was the producer.
John Currie with his strong Irish accent does a great job on those songs where an Irish connection is often suggested, accurately or otherwise, e.g. Wild Colonial Boy, Black Velvet Band, Denis O'Reilly and Shores of Botany Bay but the strong brogue is a bit off-putting in bush songs such as 1000 Miles Away and Click Go the Shears. However, he does a great job of The Old Bullock Dray where his brogue is nowhere so evident but I don't like his Flash Jack from Gundagai. Overall, I highly recommend this music, it has a 'folky' naturalness rarely achieved elsewhere. The songs, listed under their singers, are:-