Leonard Teale and Andy Sundstrom "Travelling down the Castlereagh" 1970 LP 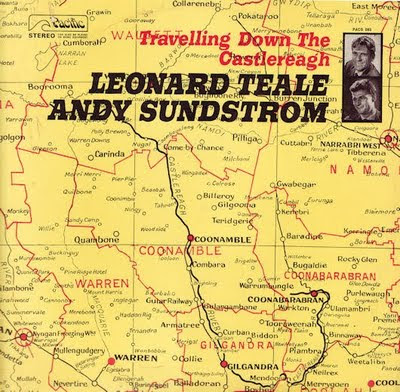 In Australia, Leonard Teale was a very well-known entertainer. He is best remembered, by those old enough, for the many years he spent in the TV show "Homicide". Second, he was almost infamous for reciting "The Man from Snowy River" at just about every opportunity. Very few, however, realise that he was a significant contributor, along with Andy Sundstrom, to the Australian folk scene in the early 1960s. As well as various live performances, they put out two albums, the other being the earlier "Songs the Sundowners Sang". Both are largely forgotten albums never being re-released although some tracks have appeared on compilations.

This is an album which has a lot to recommend it. Not only are they competent performers, but they also perform the better known tracks in a distinctive style all their own. But there are also tracks not previously posted on this blog. The LP has cleaned up nicely.