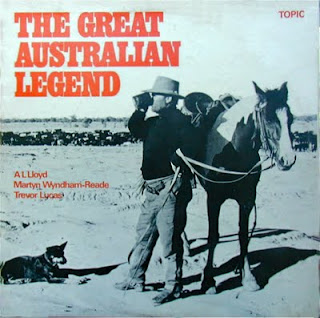 This LP was lovingly ripped by my associate Gonzo several years ago (please see his detailed comment).  It was retailed in the UK by Topic Records and in Australia by Score Records.  The three singers performing on the LP were:
A.L. Lloyd, commonly known as "Bert" Lloyd, was one of the recently popularised "forgotten generation" sent out to Australia at the age of 15 and he worked on stations in the Lachlan River area of New South Wales for six years before returning to England.  He is said to have collected folk songs from the locals.  He certainly was a fervent folk music performer with a significant role in promoting traditional English language folk music especially of the British Isles.
We have met Martyn Wyndham-Read before on this blog.  He too, is English, and spent most of the "sixties" in Australia and has often visited since including this year.  He also, has produced several English language folk albums.
Trevor Lucas, the third artist, was Australian born but he spent considerable time in the UK.  One of his LPs has been previously posted on this blog.
Tracks are:
1. Waltzing Matilda (original version)  - Lloyd and Chorus
2. Jim Jones at Botany Bay - Lloyd and Chorus
3. The Wild Colonial Boy - Lloyd and Chorus
4. The Streets of Forbes - Trevor Lucas
5. The Hold-Up at Eugowra Rocks - Lloyd and Chorus
6. The Flash Stockman - Martyn Wyndham-Read
7. Five Miles from Gundagai - Trevor Lucas
8. The Lime-Juice Tub - Lloyd, Wyndham-Read and Chorus
9. Euabalong Ball - "Bert" Lloyd
10. Banks of the Condamine - Trevor Lucas
11. Click Go the Shears - Martyn Wyndham-Read
12. Flash Jack from Gundagai - Martyn Wyndham-Read
13. Hard Tack - Martyn Wyndham-Read
14. On the Road with Liddy - "Bert" Lloyd

Peter, a NSW country visitor, has passed through and provided some additional material for the blog. This included another copy of the above UK issue of the LP, i.e. on the UK Topic label. Included was the original fold-out insert featuring notes and lyrics for all tracks and I took the opportunity to scan the rear of the LP also. The fold-out print was fairly small and indistinct so I have scanned at 300dpi which makes for large files - all up 14.07mb.