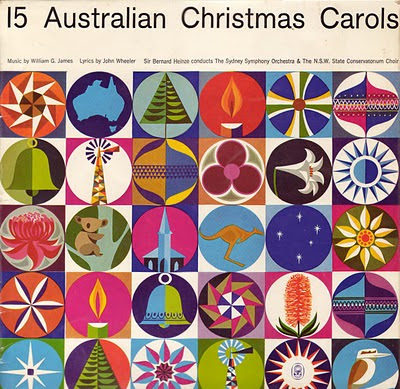 I have had a few requests here and elsewhere to post some genuine Australian Carols.  I'm not really into carols (my favourite Christmas song is Eric Bogle's "Santa Bloody Claus").  However, a friend had previously asked me to get him a rip of this album so I've finished it off for him and I'm posting it here as well for anyone interested.
We "down under" tend to occasionally have problems with northern hemisphere carols especially when they talk about cold and snow.  You feel pretty silly singing them in the middle of a heat wave with the sweat streaming off your brow. The one exception I recall was the one about Santa Claus riding a strawberry roan when he goes to Texas because they don't have snow but I have not heard that one since the late 1950s.  Many have attempted to rectify the problem usually with little success - "Six White Boomers" still does well though.
In terms of a serious effort, this LP is probably the best known and even then it is fairly obscure although you will often encounter some of the carols sung by choirs at Xmas.  It covers the Australian Christmas time environment while maintaining a dignified respect for the religious aspects.
The pedigree of these tracks is excellent.  Words by John Wheeler, music by William G James, Sir Bernard Heinze conducting the Sydney Symphony Orchestra and the New South Wales Conservatorium Choir.  I tend to find it a bit too stuffy but I'm sure it will delight those who are into carols and there are really a couple of worthy carols here.  But do listen to Bogle's "Santa Bloody Claus" as well.
I have included the lyrics for all the tracks as well as there is little point in carols if you can't sing along.

Song List (as per request in December 2011)
1. Merry Christmas
2. The Three Drovers
3. Christmas Night - Cradle Song
4. Christmas Day
5. Carol of the Birds (aka Orana)
6. Our Lady of December
7. The Little Town where Christ was born
8. Noel Time
9. Christmas Bush for his Adorning
10. The Silver Stars are in the Sky
11. The Christmas Tree
12. The Day that Christ was Born on
13, Country Carol - The Oxen
14. Golden Day
15. Sing Gloria

Link failed? Then please leave a comment or contact mr.stockman@gmail.com
Posted by Paul the Stockman at 6:54 PM