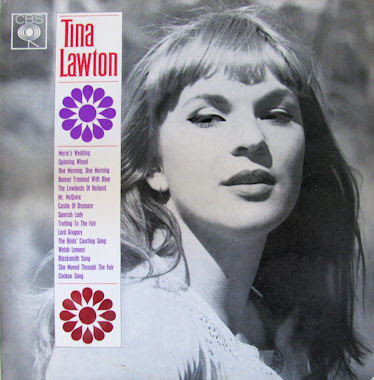 The very popular Tina Lawton, folk singer and artist, was 21 years old when this, her first album was released in December 1965.  On it she featured traditional songs of the British Isles, accompanied, amongst others by the harpist Huw Jones and Andy Sundstrom on guitar.
She went on to appear in the ABC film "The Restless Years" in 1966 and to release a further two albums "The Singing Bird" and "Fair and Tender" and also toured in Vietnam and other locations entertaining troops.  In 1968, she took up full-time art studies in Edinburgh but still performed intermittently in the UK.
In December 1968, she visited a friend in Kenya where on the 22nd December, she died in a small plane crash.  Truly a great loss to the world of music.
Sadly, I do not have access to her other two LPs which show a greater professional maturity.  Can anyone help?  This LP was very "dirty" but it has "cleaned" to a sort of listenable level.

Link failed? Then please leave a comment or contact mr.stockman@gmail.com
Posted by Paul the Stockman at 6:27 PM