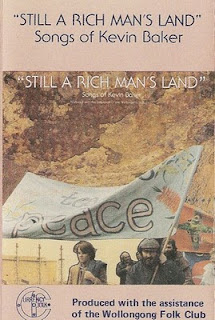 We met The Currency Folk (Kevin and Beth Baker) in January. They were responsible for putting together, and appearing on, "Beneath the Smoke - a Gathering of Nations".  This album, which may have been issued at about the same time, featured only songs written by Kevin Baker, a political activist, of many years standing.  There are some great tracks on here backed by some very good musicians. Beth Muntz,a good singer, appears as a solist on four of the tracks and provides some vocal backing to Kevin Baker on the others.  Kevin is distinctly a better song writer than a singer but his vocal qualities are fitting for the songs he writes.  Overall an entertaining album.

This cassette rip was provided by one of our visitors along which some others soon to appear.  Many thanks for your kind assistance.  The tracks are all MP3 at CBR 192.

The tracks are:-
Smoky Steel City, Windows of our World, Security, To Absent Friends, Executive Man, Mt. Kembla Mining Disaster, Streets of our Town, Children, Men of Kamira, Seeds of Tomorrow, Let's be constructive Australia, and Come now my Companions.