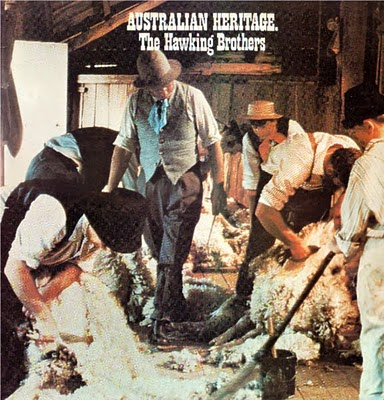 The Hawking Brothers were Russ Hawkings (1931-1976) and Alan Hawking (1933-1988).  Excellent singers and instrumentalists, they first recorded in 1955 and were equally proficient with both traditional Australian folk music and country music.  In the latter genre they very deservedly had a big hit in Australia with the American song Catfish John (on their self-titled album).  They toured North America in 1975 and appeared at the Grand Ole Opry.

This album was produced in 1971 and features Australian traditional folk songs.  In 1975, they also produced a volume 2 but I have not yet been able to obtain a copy.

I have no idea who ripped this LP but if you are out there reading this, please accept my thanks.  It is MP3 VBR ranging from 178 to 202.
The tracks on this album are South Australia, Wild Colonial Boy, The Limejuice Tub, Botany Bay, Ten Thousand Miles Away, Bullocky-O, Click go the Shears, Eumerella Shore, Ladies of Brisbane, Flash Jack from Gundagai, With my Swag on my Shoulder, The Queensland Drover, and The Old Bullock Dray.

Posted by Paul the Stockman at 9:59 PM