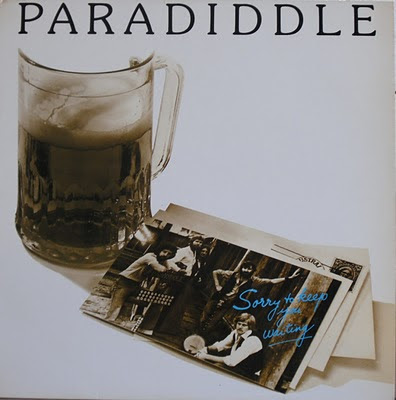 This is the second (and as far as I know the final) album release by the Victorian based Paradiddle Folk Band.  It's quite an eclectic mix of traditional and modern folk from the British Isles and Australia.  There are some very good tracks on this one in the a capella style and also a couple of enthusuiastic instrumentals.And, just in case someone has never heard it, they have included their rendition of Bogle's great song ".... Waltzing Matilda". It has been a pleasure to work on these two Paradiddle albums  - nice clean vinyl!
MP3s encoded at 192-224 VBR - 70 Mb file
Tracks are:
1. I am a Tolerant Man
2. The Jolly Tinker
3. Norman Brown
4. Auld Wullie
5. Snakes
6. Oh, Bedad then, Says I
7. The Hole in the Boat (instrumental)
8. Bullockies Ball (a rarely performed Australian traditional collected by John Meredith)
9. The Kelly's Turning
10. The Miner
11. The Landlord's Fool (Landlord fill the flowing bowl)
12. Maranoa Drovers
13. Merry Clare
14. The Band Played Waltzing Matilda

Link failed? Then please leave a comment or contact mr.stockman@gmail.com
Posted by Paul the Stockman at 6:15 PM