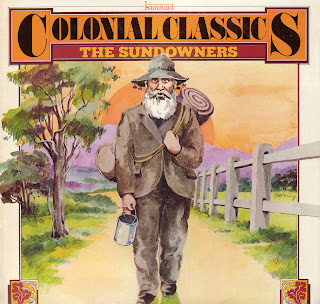 The Sundowners were founded in 1977, its members being Tony Hunt, Peter Keown, Bob Hugo, Dave Isom and Mick Slocum.  "Colonial Classics", released by Hammard in 1981, was their first album release. The LP was subsequently re-released on CD and most of the tracks have appeared in bush ballad compilations all of which have been unavailable for some time now.  The LP has been faithfully re-constructed using 12 track re-issues and 5 rips from the original LP.  Lively performances from five competent performers, three of whom were previously part of The Bushwackers.
Tracks are Waltzing Matilda, 1000 Miles Away, Cash & Co (instrumental), Drovers Dream, The Overlanders, Botany Bay, a medley of Black Velvet Band and Wild Rover, With me Swag all on me Shoulder, South Australia, Click go the Shears, Ryebuck Shearer, Flash Jack from Gundagai, Wild Colonial Boy, Travellin' down the Castlereagh, a medley of Along the Road to Gundagai; Where the Dog sits on the Tuckerbox and Yarrawonga, and Lachlan Tigers.

Download with Graphics
Download has now been cancelled because Mick Slocum has advised that he still has copies of the album for sale. He can be contacted at michaelslocum49@gmail.com. Full details available from http://australianfolk.blogspot.com.au/2012/11/the-sundowners-colonial-classics-1981.html