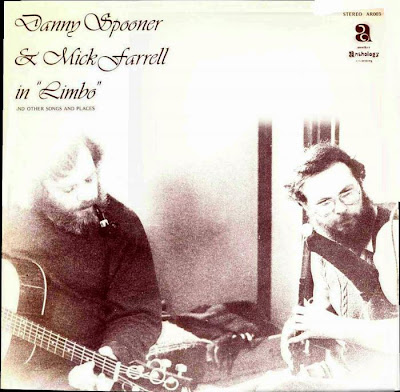 Danny Spooner surely did like putting out his early LPs in company with others. On this occasion he teamed up with one Mick Farrell who provides musical backing to Danny's guitar and also has some solo moments on the Uilleann Pipes.
I know, and can find, nothing about Mick Farrell other than in respect of his performance on this LP.  The LP notes advise that he was born in Sussex (England) and has Irish and Scottish ancestry.
I am a bit of a fan of the uilleann pipes (and also the Northrumbrian smallpipes). In the 1970s, interest in uilleann pipes was quite low despite the historically proficient performances by such greats as the then mostly retired Seamus Ennis (died 1982), Willie Clancy (died 1973) and Leo Rowsome (died 1970). The Dubliner maker, then in his eighties, Matt Kiernan, from whom Farrell says he obtained his pipes in 1975 was one of only a handful of active makers back then. Fortunately, the situation has improved greatly since then with lots of makers and players.
Obviously, Mick Farrell would have been a rarity in Australia in 1978. He states in the LP that "the chanter is pitched a little below C and this style is called the 'singing chanter' because of its felicitous compatibility with the human voice". In fact, he uses only the chanter (the drones are turned off) even in the solo parts. Regardless, he accompanies Danny brilliantly. (If interested there are some good clips featuring great uilleann pipes players on YouTube)

I was provided with a great copy of this LP by one of our loyal visitors and the graphics but another visitor subsequently provided a cleaned up copy of the same LP and this is the version posted (I try not to do too much work if I don't have to). Many thanks to the both of you.

Download with Graphics
From MediaFire
Danny Spooner's widow has advised that plans are currently underway to expand the www.dannyspooner.com website to re-release Danny's music to raise funds for a memorial statue. Accordingly, the album is no longer available for download.

Posted by Paul the Stockman at 9:37 PM