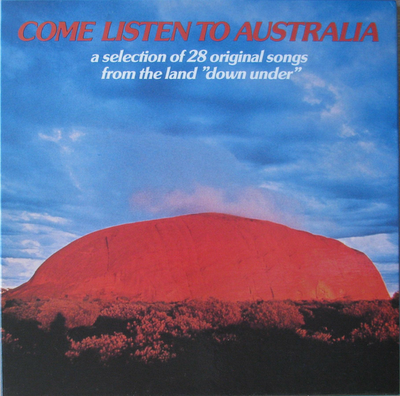 I recently stumbled over this boxed 2 LP set. It was released on the German Teldec label in 1985 with extensive notes on both the music and Australia in both English and German. From the notes it appears that both Warren Fahey and the Australian Government contributed information and, quite possibly, encouragement for the release of the LP. Perhaps it was meant to be, at least in part, a tool to encourage possible migrants. The set features various Australian-based artists with a strong folk and protest flavour.  Possibly this set migrated to Australia as I can find no Australian references to the set. The second LP is a bit "iffy" in respect of some of the tracks which have not cleaned up as well as I would have liked so there are still some residual problems which detract in respect of three of the tracks. Because of this I have listed the two LPs seperately. I have also considered that LP1 is more in the remit of this blog but certainly LP2 is quite entertaining in its own right. There are a couple of errors in the listing of the tracks and artists in the booklet that came with the set, notably, Mike Jackson is listed as Michael Jackson; "10000 miles away" was reduced to just a 1000 miles and the Cathie O'Sullivan combo of "Nipper" and "Big Bill" (recently posted on the High Places album) is listed as one track and the notes give details about both but "Nipper" is not included on the LPs.

My scanning of the included booklet is a bit crude (too large for A4 scanner) but includes all the pictures and text. It's also a seperate download.
Download Artwork and booklet (MediaFire)

Links failed? Then please leave a comment or contact mr.stockman@gmail.com
Posted by Paul the Stockman at 1:36 AM