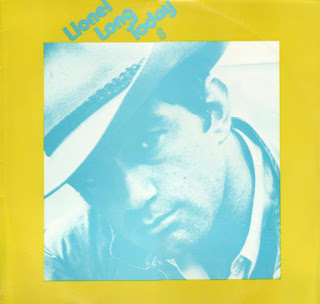 Lionel Long put out this album in 1967 after returning to Australia from a stint spent in Europe. It's a bit of an eclectic mix mainly of (then) contemporary folk and popular music.
I recently discovered a copy of this LP - a World Record Club re-issue - which accounts for the rather bland cover shown here. (can anyone provide a copy of the original cover?)

The tracks are:-
1. The Piney Wood Hills written and originally performed by the outstanding Amerind performer Buffy Sainte-Marie.
2. Dancing Distance from Mason Williams and John Stewart.
3. Love Minus Zero by Bob Dylan
4. Flowers of Peace - Penned by Pete Seeger to fit the tune of the Scottish folk song "Wild Mountain Thyme" aka "Will ye go, lassie, go"
5. Follow the Wind - a 1965 composition by the then 18 or 19 year old Barry Gibb (of the Bee Gees) and originally recorded by them in 1965 as the B side of a 45rpm single (despite claims that Lionel Long was the first to record this this song). Lionel does a great job on this track and it is definitely in the contemporary folk genre of the 1960s.
6. Many a Mile by Patrick Style
7. Them Poems - Mason Williams wrote and performed several short comedic songs which were collectively known as "Them Poems". Lionel performs five of these, namely. Stamp Lickers, Banjo Pickers, Toad  Suckers, Sportcarers, and Hors d'oeuvres.
8. Life Song another by Mason Williams much admired by Lionel Long.
9. Alberta - a modern reworking of a traditional Afro-American song.
10. Blind Men Wander by Peter Best (Australian composer)
11. The Marvellous Clouds by the American poet/songwriter/singer so popular in the 1960s, Rod McKuen. (My preference would be for other Rod McKuen songs)
12. Less of Me by Glen Campbell. It was a hit in Australia in 1966 for Gail Martin, daughter of Dean Martin.
13. Come the Time - another by Peter Best
14. A Repco Brabham Car - A comedy piece penned by Lionel.
15. The Green Years - Lionel wrote this largely autobiographical song straight from the heart.

Definitely not your usual Lionel Long fare but nevertheless very entertaining. My favourite is "Follow the Wind".

Link failed? Then please leave a comment or contact mr.stockman@gmail.com
Posted by Paul the Stockman at 10:02 PM