What are Child Ballads? 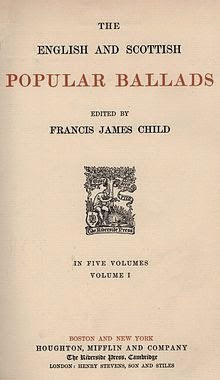 I referred to Child Ballads in a recent posting and now realise that I should provide an explanation for those who are wondering just what I am referring to.

Francis James Child, an American, in the 19th century, amongst other things, was a dedicated collector/collator of English language folk songs, mainly English and Scottish but also with some American variations. He published "The English and Scottish Popular Ballads" in 5 parts between 1882 and 1898. It featured 305 different folk songs and many of their variations, each was given a number.

These songs and their variants are popularly known as "Child Ballads" and individually as "Child Ballad (No.). For example Child Ballad 200 is entitled "The Gypsy Laddie" and is a story about a high born lady who is lured by one or more gypsies to leave her wedded lord to live with the gypsies. The lord takes after them and pleads for his lady to return. She refuses and he usually hanged the gypsies. Child provided 12 variants - mostly older ones.

Many people throughout the world collect performances of folk songs listed by Child - not just the ones he listed but also other variants ancient and modern. Child Ballad 200 is very popular and some of the other song titles are "Wraggle Taggle Gypsies", "Awa Johnny Faa" (Old Scots slang for Gypsy), "Seven Yellow Gypsies", "Gypsum Davy"  and "Black Jack Davy". Woody Guthrie copyrighted and sang "Gypsy Davy", an Americanised version. America also offers up "Clayton Boone" who is a rancher whose wife runs off with "handsome Davy".

There is also the much sanitised version/s popular during the folk revival - "Gypsy Rover" or "Whistling Gypsy" etc. In this case a Gypsy runs off with the Lord's daughter (no adultery here) and the Lord takes off after them and tracks them down to the River Glady where she tell the doting dad -
"He is no Gypsy, my father, She said. "But Lord of these lands all over.." Ah! Happy endings.

It is for the Child Ballad collectors that I put up a special download link in case that is all they are interested in. Incidentally many Australian folk singers perform Child Ballads.

There is lots about Francis James Child and Child Ballads on the web - Just Google. You can actually download the books as PDFs (copyright has long expired) and if you want to see what songs are included and even see the lyrics, click here to go to this Wikisource site. See comment below for a site listing known recordings of the Child ballads.

Posted by Paul the Stockman at 8:31 PM