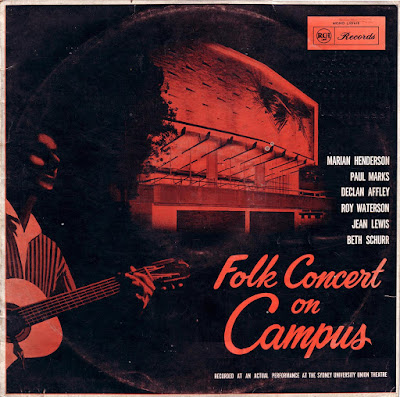 Quite an impressive lineup here. This folk concert was held by the Sydney University Folk Music Society over three days in December 1964 at the University's Union Hall. RCA attended and recorded sessions. I am guessing that the contents of this album represent the best of the performers and the tracks are said to be in performance order. I presume the album was released in 1965.

The first of the artists was Beth Schurr who is mentioned by Warren Fahey as being an early folk participant especially in respect of live TV performances.

Declan Affley, despite passing away far too early in 1985 is very well known in Australian folk circles. Born in Wales to parents of Irish heritage, he became a merchant seaman but jumped ship in Australia in 1959 and became fully immersed in the Australian folk scene. There is some distortion in some of his tracks and I suspect that he was then a sound recordists's nightmare.

Roy Waterson (aka Watterson) was, like Affley, a young migrant to Australia. He was born a Liverpudlian in 1935 but was reared in Wales whose culture he readily adopted. He sings beautifully on his two tracks accompanied by Irish harpist Astrid Frost, an immigrant from Dublin. Roy was a persistent performer including opera, concerts and clubs but always at the edges of true success. Eventually, he developed and ran the very successful "Good Old Days Concerts" aimed at senior audiences and received both Australian and Welsh awards. He died in Sydney in 2013.

Jean Lewis was almost 20 when she performed at the Concert. At the time she was a student at the University and a activist supporting the National Aborigines Day and the Freedom Ride on 1964. As "Jeannie" Lewis, she went on to a very successful musical and stage career. She featured on the Come Listen to Australia album featured on this blog for "Red Dust".

Paul Marks was an occasional folk singer but was more into jazz, skiffle, blues and spirituals. He migrated from the UK in 1956. He abandoned music probably not that long after his performance at the concert.

Last but definitely not least is the late Marian Henderson performing four numbers. Look elsewhere on this blog and the web for more details about her.

I received this album in MP3 at 320 CBR in the rough. I have managed to get some of the glitches out but the recordings had some of the typical problems of live performances and there is variation specific to each artist. I eliminated the introductions and the massive amounts of applause as most, if not all, of it was "canned" applause with absolutely no vocal noise at all - just clapping.  I guess that RCA thought that was much neater.

It is not all that surprising that in 1964, the students involved in the Society were far more interested in performances of non-Australian folk songs. Only two of the 18 tracks are Australian. "Emu Plains" by Lewis and "Bluey Brink the Shearer" by Henderson. Speaking of "Emu Plains" - can someone please tell me what instrument is providing the backing? (Agreed to be harmonica)

Tracklist
By Beth Schurr
1. The Keys of Canterbury
2. The Next Market Day

By Paul Marks
12. Tom Pierce
13. Sipping Cider through a Straw
14. The Frog and the Mouse

Click here for Download Link of the album which is a compressed file needing to be decompressed into its folder and tracks. (I get asked often why the download file does not play)
Tracks are Mono MP3 224-256 VBR Mono 34Mb

Posted by Paul the Stockman at 3:33 PM