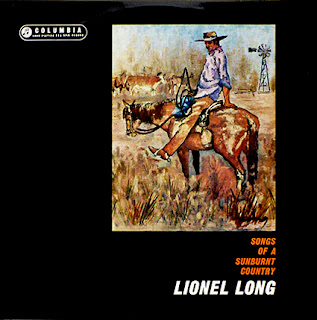 Ian from Tasmania provided a rip of this album. Thanks Ian!

This was the fifth of Lionel Long's albums and it is a mix of Australian country and folk; the latter including a strong component of Australian traditional folk songs which most visitors will immediately recognise.

"The Note on the Woolshed Wall" was penned by Lionel Long about when he was a roustabout at "Tarewinnabar" station  in about the late '50s. He did write a composition onto the wall of his room in the station's shearer's quarters but I cannot remember if it was this song but I do recall the phrase about "wild horses". (Certainly, this song was in play long before this LP was released but I cannot find any details of its initial release.) Back then, the station was owned by Sir William Gunn of The Wool Board fame. "Tarewinnabar" is about 40 miles north-west of Goondiwindi and just on the Queensland side of the QLD/NSW border but the album blurb infers Lionel was in North Queensland.

The LP has obviously suffered some wear but has generally cleaned to an acceptable level. The major exception is the recitation of the "Banjo" Paterson poem "The Man from Snowy River" which is highly sibilant. Fortunately, it is not that great a performance (IMO).


Click here to download. MP3 @224-256VBR - graphics included. 45MB
Want FLAC - click here - 139Mb with graphics.
They are compressed files needing decompression with 7-Zip, WINRAR, WIN  ZIP, or similar.
If link fails, let me know and I will create a new download link.
Posted by Paul the Stockman at 9:34 PM