Ned Kelly's Cousins "Songs from the Land Down Under" Cassette 1997 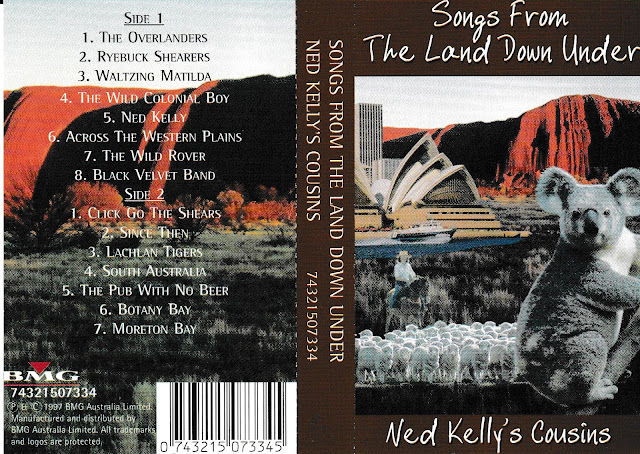 I found this cassette at a book fair and I cannot find out anything about it other than what appears on the cassette information and that the National Library of Australia has a disc copy of the album. It looks like an album aimed primarily at an overseas market and/or as a souvenir for overseas visitors.

According to the cassette information, the album was recorded and mixed in Sydney and thanks are also offered to personnel at Cooneys Tavern in Wollongong. The band members are identified as:-
1. John Baxter - vocals and accordian (sounds Irish presumably related to next person)
2. Peter Baxter - producer, vocals, guitar and bouzouki and writer of one song on the album (Ned Kelly) - extremely likely to be the Irish performer at this link.
3. Alan Morrison - vocals , bass and guitar
4. Johnny Spillane - backing vocals, whistles. lager phone (sic), harmonica and bodhran. Now identified as an Irish expat from County Cork still resident in Wollongong. (see two visitors' comments below)
5. Gregg Stevens - vocals, guitar, mandolin and bouzouki (Australian?)

Can anyone help with further information on this group, its members and the circumstances surrounding the creation of this album? There is a strong Irish influence overall.

The tracks are traditional except where authors identified below.

Posted by Paul the Stockman at 5:18 PM