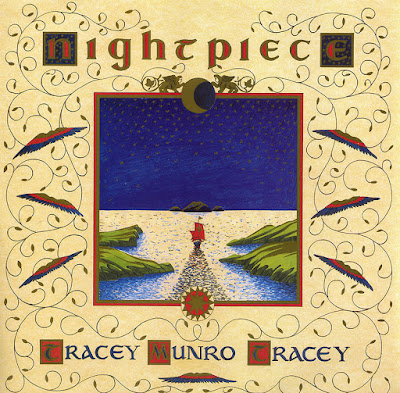 We need to thank the Victorian Bush Folkie for making the tracks and graphics of this album available.

"Tracey Munro Tracey" was the group name chosen by Lynne Tracey, John Munro and Denis Tracey for the release of this album. It was recorded in 1986 and released in 1987. As far as I can determine, ti was not released on CD.

We have met Denis Tracey before on this blog but I know nothing about Lynne Tracey. Additional information from visitors:- Lynne Tracey is also known as Lynne Muir and is a well-known illustrator. See one of many web entries about her at The Printery House which makes this identification highly positive.

John Munro, an ex-pat Scot, will be very well known to many visitors on this blog. He has had a long career in folk but, of recent times, he is probably best known through his frequent and enduring association with fellow ex-pat Scot Eric Bogle. Need to know more? - then Google him.

There's just a little Australian content on this album, namely, the performance of Reedy River; the Henry Lawson poem as adapted by Chris Kempster. There are four tracks in the British Isles folk tradition, namely, Kelvin Grove, Miss Robertson's Reel combined with Troy's Wedding (instrumental), Bonny George Campbell combined with the instrumental Green Cathedral and the the Irish Giolla Mear (Mo Ghile Mear). The other tracks are not really folky (in the sense I use it) - more like early "new age". Of course, it is a pleasure to listen to this album with each of the performers displaying great talent. There is one unexpected feature in tracks 7 and 10 - Lynne Tracey's breathing in  is often very audible. Just ignore it.

The LP has cleaned up well.

Click here to download from MediaFire
You will need to decompress the file you download to extract the folders and the track files and graphics. MP3 @ 224-256 VBR - file size 62Mb.
Posted by Paul the Stockman at 11:29 PM