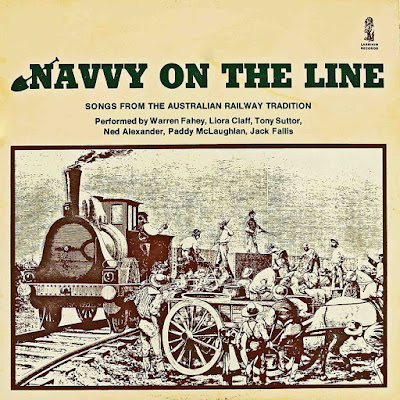 John B of NSW has very kindly provided us with his rip of this album. Many thanks John - I had been wondering when I would be able to access this one.

The performers on this album were Warren Fahey, Liora "Lalita" Claff, Tony Suttor, Ned Alexander, Paddy McLaughlan and Jack Fallis with alternating vocal performers as specified on the rear of the LP slip (graphics included in the download).

It's an enjoyable album featuring music, as sub-titled, "from the Australian Railway Tradition".

Tracklist
01 The Brocklebank Engineers
02 I Came Over From Ireland
03 The Night Express
04 Cant-hook and Wedges
05 On The Queensland Railway Lines
06 The Sunshine Disaster
07 The Ten Penny Bit  - Frost is All Over
08 Billy Sheehan
09 Only One More Drink
10 The Dying Fettler
11 The Shooting of The Crow
12 The Trumpet - Ned's Favourite
13 The Sandy Hollow Line
14 Navvy on the Line
15 The Woy Woy Workers' Train.

Click here to download from MediaFire
It is a compressed file which will need to be decompressed after downloading. Tracks are MP3 192 CBR. File size is 52Mb.
If download becomes unavailable please let me know and I will re-up the file - mr.stockman@gmail.com
Posted by Paul the Stockman at 4:10 PM