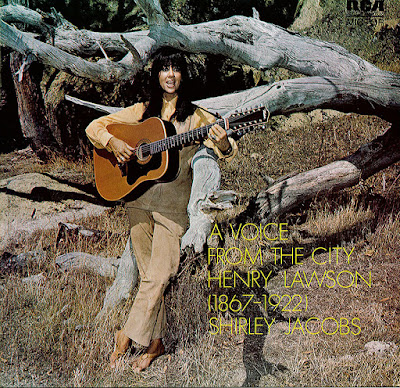 The album features musical arrangements of both better and lesser known Lawson poems with perhaps a preference for the more personal and romantic poems.

One of our visitors provided me with a copy made from his LP earlier this year. The included graphics were from an earlier offering. Many thanks to the two of you. It seems to be very hard to get good copies of Shirley Jacobs albums - presumably because their owners often played them. There are still a few glitches in the edited tracks but most will enjoy them.

Download FLAC version from here - 132MB
Download MP3 224-256 VBR MP3 version here - 38MB.
Downloaded file will need to be decompressed before playing.
If a download fails tell me by email at mr.stockman@gmail.com and I will re-up the file
Posted by Paul the Stockman at 9:25 PM