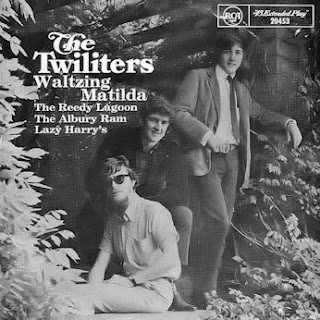 We have already met the Twiliters with their two albums and it is disappointing that only one traditional Australian track "The Albury Ram" appeared on those two albums.
Well, they actually performed more Australian folk songs than that as evidenced by this EP which was released after the two LPs (but was never followed up by an LP).
The four tracks are:-
1. Waltzing Matilda
2. The Albury Ram (studio)
3. The Reedy Lagoon
4. Lazy Harry's

This EP is in bad shape especially track 3 which had several skips. I did manage to patch that track together after considerable effort and Franz and I have worked hard on it but we couldn't remove all the effects of all the skips. Still, you will find far worse offerings on the blogs. The other three tracks have ripped and edited to an acceptable level. It really is a pity that these three lads did not publish more Australian traditionals.