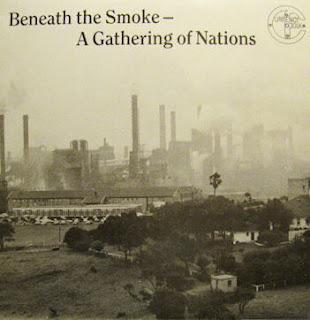 Beth and Kevin Baker (Currency Folk) of the Australian industrial city of Wollongong (hence "Beneath the Smoke") put together this LP with a view to featuring the songs of different ethnicities within the area.  The result includes Australian artists singing traditional and modern folk songs (The Billabongers and the Bakers); Chileans Fernando and Sonia Aranciba with friends performing songs and instrumentals of rebellion; An Italian immigrant, Gerardo De Liseo, performing traditional songs of his original homeland; Vince Brophy, an Irish immigrant, singing two British Isles traditionals and also one of his compositions "Tug Boat"; and an English immigrant, Val Whittaker, also performing British Isles traditionals.

It was a well-packed LP with almost an hour's music.  The recording quality is variable but I found myself really enjoying the Italian and Latin American tracks.  Other than for  El Calameno, the download includes the lyrics of the Italian and Chilean songs with English translations.