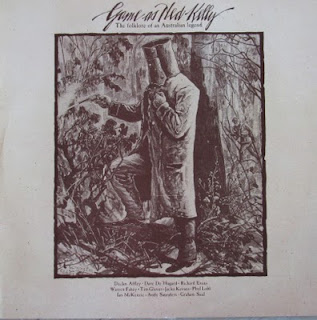 For our international visitors, it is probably sensible to give a quick postage-stamp view of Ned Kelly and the Kelly Gang.  Edward ("Ned") Kelly was born in the state of Victoria. His father was a transported convict.  Starting out as a horse thief, he went on to lead a bushranging gang in the 1870s.  This gang mainly operated in Victoria with one significant incursion to Jerilderie in New South Wales.  His final robbery involved the capture of the Victorian town of Glenrowan.  He became aware that a trainload of troopers (mounted police commonly known as "traps") were travelling by train to capture him.  He then removed train tracks to derail the train but the troopers were informed, left the train, and walked to Glenrowan where the gang was beseiged.  Most of the gang were killed in a shoot-out.  Ned Kelly, wearing heavy metal armour then confronted the police firing as he came.  He was brought down by bullet wounds to his exposed legs, captured, tried, and hung at the old Melbourne Gaol.
He is regarded by some romantics as a bit of a folk hero fighting against the villainy of authority.  In the Jerilderie Letter, he presents himself as continuing the Irish Catholic fight against the Saxon hordes - a view somewhat spoilt by the fact that he had no hesitation ambushing and killing a group of Irish-born troopers.
As with all romantic figures, he features in several songs over the decades including some written and sung during his bushranging days.  Warren Fahey, on this LP, includes a good range of those songs.

Apparently there has been a DCMA complaint about this particular album - my very first.  The supposed email with the details of the complaint has apparently been sent by Blogger but I have not received it.  I'm quite surprised that someone took such action over this LP but so be it.  No more downloads folks! Obviously there are some people who would rather that this music remains lost in oblivion.   If its been republished, I'd love to receive some details so I can post them.
Posted by Paul the Stockman at 6:52 PM