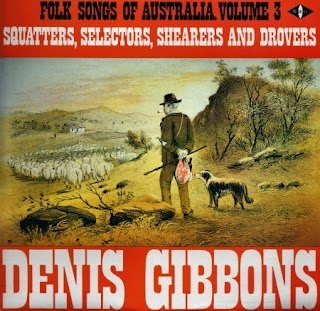 The tracks and graphics for this LP were kindly recorded and forwarded by Brendan of Tasmania who previously provided the New England album "A long way from home".  He has also provided other albums which I hope to get up here sooner or later.  Many thanks Brendan. Blokes like you make the continuation of this blog so much easier.
The theme of this LP is "squatters, selectors, shearers and drovers". I have no idea when this was released but my guess and that of the Australian National Library is sometime in the 1970s.  (volume 2 was released in 1966).  In terms of presentation and singing style, there is a marked difference from earlier records and he has tried some different arrangements for some of the tracks.  I have no problems with that.  Folks songs are meant to be re-interpreted after all.
I do apologise because there is some distortion on a couple of the tracks - well-loved and well-played LPs often have that problem.  "Reedy River" has Denis Gibbons sounding a bit like Harry Belafonte.
It's a stereo LP encoded as MP3 at 192-224 VBR and 42Mb all up.
The tracks are:-
Lazy Harry's, New England Cocky, Another Fall of Rain, Humping Old Bluey, Bush Girl, Bullocky Song, Cockies of Bungaree, One of the Has Beens, Eumeralla Shore, Reedy River, Shearer's Dream, The Overlander.  Bush Girl and Reedy River are, if I recall correctly, Henry Lawson poems put to music.

Link failed? Then please leave a comment or contact mr.stockman@gmail.com
Posted by Paul the Stockman at 11:28 PM