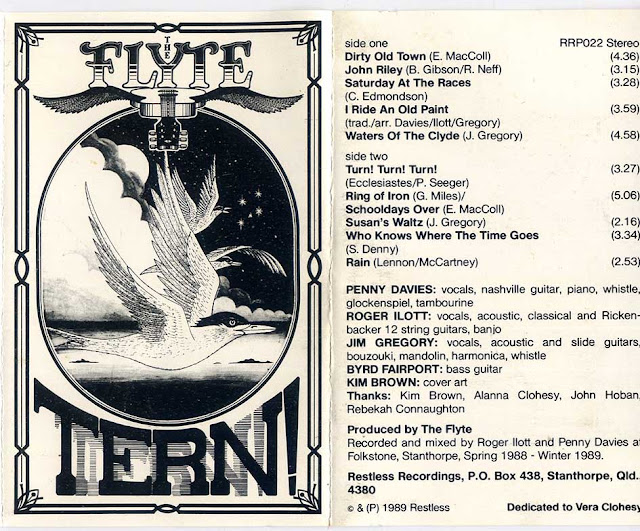 Another one gratefully received from the Victorian Bush Folkie. The Flyte were composed of Penny Davies, her life partner Roger Ilott, Jim Gregory, Byrd Fairport and Kim Brown. The music was recorded 1988/1989. I have not found any references to this album which was produced by Restless Recordings owned by Davies and Ilott. I recommend that you click here to peruse their website "Restless Music". It is well worth a visit and they have several CDs for sale at reasonable prices and some free downloads.. Davies and Ilott are still very active at folk festivals and folk venues and catch them if you can. They do a great job on the late Bill Scott's poems and songs.

This particular album is "out-of-print" and quite clean. The major task for me was the simple one of removing the usual tape and player noise. The tracklist is shown on the above graphic.

Click here to proceed to download the compressed album. Needs to be decompressed before playing. 48Mb of 10 MP3 files @224-256 VBR.

If the download link fails make a comment on this posting or email me mr.stockman@gmail.com
Posted by Paul the Stockman at 6:09 PM