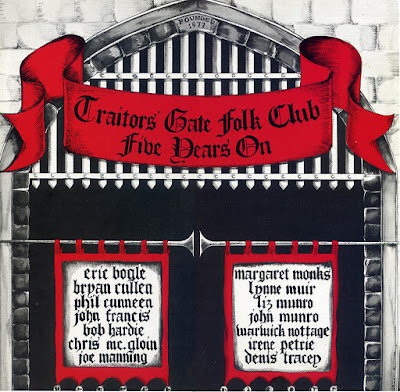 Another offering from the kindly Victorian Bush Folkie. Thanks again. I have been asked for this a few times over the years.

The Traitors Gate Folk Club  was the folk venue to go to in Adelaide in the late '1970s and early 1980s. I attended  the club a couple of times when they were using the Leicester Hotel in Parkside as a venue.

This LP was released in 1982 featuring singers who performed at the club over the years but they are not live performances.  The record was released with an informative insert but we do not have it.

The LP had quite a few glitches - quite a high level of crackles and pops and the vocals had far too many moments of distortion.  I have managed to clean the recordings to a good standard so please ignore the occasional residual glitches. The album is quite enjoyable and has a little of something for everybody.

New Link 12 Feb 2017
Click here to commence downloading the compressed album file with slip graphics.
File is 61Mb. Tracks are MP3 @224-256VBR
Let me know if download is no longer available and I will re-up the file.
Posted by Paul the Stockman at 8:41 PM