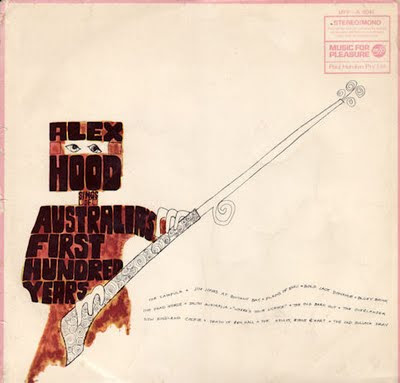 Alex Hood was one of the early participants and collectors of the folk revival and has been continuously involved ever since as an individual and a member of different folk groups. He has produced several albums and is still a regular performer at folk festivals. Another of his albums "While the Billy Boils" was posted here in January 2009.
I am guessing as to when this LP was released. I never owned this album but I recall buying the "Boomerang" songbook for it in late 1963 and the LP had been out for a while then.

This is another of the albums provided by Dave and it is a very welcome addition to the blog. Franz has also done a great clean-up on this album so many thanks to both of you.
I hope to be in a position to post his follow-up LP soon "The Second Hundred Years" but it needs a lot of work yet.