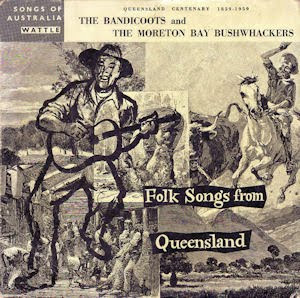 The year 1959 was the first Centenary of self-government for the colony and State of Queensland. The recording label, Wattle, issued this LP featuring traditional Australian songs collected in Queensland. Two groups contributing to the LP, namely, The Moreton Bay Bushwhackers and The Bandicoots, featured some of the early stalwarts of the Australian folk music scene particularly in Queensland. John Streeter Manifold, the prominent poet and writer with a deep interest in folk music was a member of The Bandicoots and leads on two songs. Bill Scott, who was later to become famous for his songs, poetry and folklore writing, leads on three songs. (incidentally, Penny Davies and Roger Ilott, do great justice to many of Bill Scott's songs).
Also featured are Doug Eaton and Stan Arthur among others.

Don't expect any flash, popular-style singing or great musical performances on this album. What you will get is solid traditional Australian folk singing very much in the style of the old-timers from whom these songs were collected. There are a few songs that have not been posted here before - The Freehold on the Plain, The Sheepwasher, The Old Palmer Song, Billy Shean, and a version of a personal favourite of mine, The Canecutter's Lament (anyone got other versions please). Additionally there are two instrumental numbers; Charley Sailor's Woman Song and the Cunnamulla Stocking Jig. The other usual standards are The Queensland Drover, Banks of the Condamine, The Ram of Dalby (originally of Derby, England), Bullocky-o, Brisbane Ladies, and Wallaby Stew.

Two LPs of this album were very kindly lent to me by one of our visitors who has also provided one other much-sought-after album to come. Many thanks, Dave - having two was very advantageous even though they were in relatively good condition considering their age.

Download with full graphics - MP3 at 192-224VBR
From MediaFire