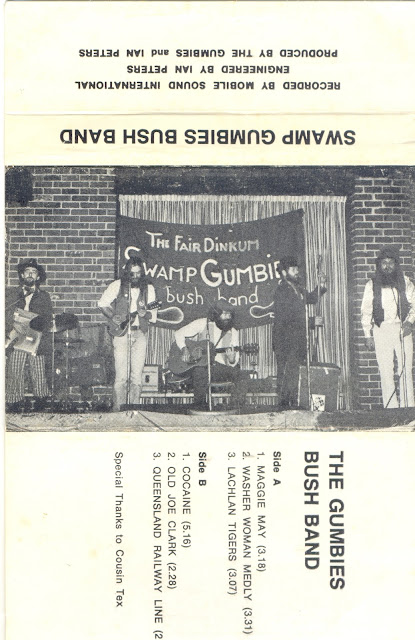 We now know a little about more this bush band.
(Re-edited entry)
And now some more again (see below)

One of our regulars had come into possession of a home-prepared cassette tape containing 15 tracks and the only identifier on the cassette was "The Gumbies Bush Band".  Our early research had been unable to identify this particular bush band other than possibly a very cursory reference to an appearance of the "Gumbies" at the Port Fairy Folk Festival in 1980.  I suspect that the cassette was recorded from an LP because of a few typical vinyl-type problems.
It is most definitely a "bush band" - lots of enthusiastic performers, lagerphones, teachest bass, whistles, banjos, guitars, harmonica, accordions, flutes, boot thumping and lots of vocalisers.  It's very much in the style of The Bushwackers and quite listenable.

Well, at last one of our visitors, Andy, has been able to provide some additional information together with the graphics (posted here) from a six track cassette he bought from the band when they used to play at the Mount Dandenong Hotel at Olinda (lovely area) in the Victorian Dandenongs in about the late 70s or early 80s where they were a local group.  Andy recalls that the bloke on the right was "Hank". From the Cassette insert, it appears that they were not all that sure as to whether they were "The Gumbies Bush Band" or "The Swamp Gumbies Bush Band" or "The Fair Dinkum Gumbies Bush Band". Many thanks Andy for the graphic and the information.

Well, we now have some more information about this group from Paul, the son of Hank "doc" Karssen. The band originally was "The Hustlers" but in the early days of venturing into folk, two of the band members came first and second in a gumboot-throwing competition at a folk festival and this lead to the name "Gumbies". They played at many folk festivals, pubs and halls etc, and appeared on the same bill as The Bushwackers and Redgum. The six track cassette was their only commercial release. The 15 track version appearing here was self-made for distribution for promotional purposes.

There were some changes in band membership over the years. The members in the photograph - starting from second left - were Ken Creighton (on mandolin), the late Peter "Pedro" Ellsworth (sitting, guitar), "Jenko" on tea-chest bass (details anyone?), and, on the far right, the late Hank "Doc" Karssen. The gentleman on the left "Tex" with the washboard was not a member but occasionally helped out and added comedy during breaks. A lady named "Merle" of Emerald (Vic) was also a regular member of the band at one time and presumably is the occasional female vocalist on some of the tracks, most notably Lazy Harry's. Most band members were originally from the Dandenong Ranges area. Many thanks for the information, Paul.

The Merle mentioned above has now been in contact with me. I'll use her words:-

Any contributions or suggestions, email me, Paul, as usual on mr.stockman@gmail.com or add a comment

Link failed? Then please leave a comment or contact mr.stockman@gmail.com
Posted by Paul the Stockman at 8:01 PM