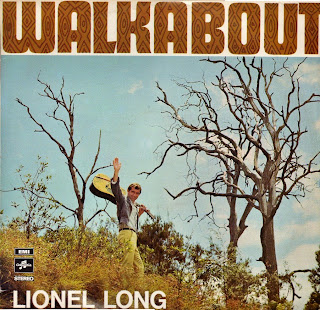 This album was billed as Lionel Long's first country and western album when it was released in 1968.  It certainly leans towards being a country album but is hardly typical of that genre.  It is more of an eclectic and interesting mix of songs from a rural perspective.

Nine of the eleven tracks on this LP were written by Lionel Long; the other two being the song "A Town like Alice" penned by Lettie Katts and an Australian traditional "Westward", more commonly known as "Hurrah for the Roma Railway" but given more of a country treatment.  Nevertheless, there are some very good tracks on this album.

The tracks on this LP are Bindi-i-i, Curraweena Station, Lucky Opals, Thursday Island Girl, Legend of Pirili, 600 Miles, Westward, Jet Plane, Thar She Blows, A Town Like Alice, and Nick the Greek.

The LP cover and its label are very definite about this being a stereo LP.  In fact, it was totally mono - not even an attempt at simulated stereo so I have encoded it as mono as this halves the size of the file.

With graphics - encoded at 192 VBR MP3.
Download from MediaFire