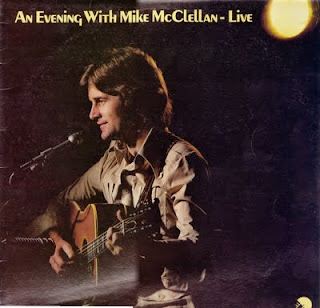 Mike McClellan was a very active entertainer in the 1970s abundantly displaying superior singing, guitar playing, and song-writing skills. His range included popular, folk, and country music.  In 1979, he went on to host a television country music show.  In 1982, he toured overseas returning in 1983 to focus on an advertising career. Since then, he has performed and released albums very infrequently.

None of his releases are currently available for purchase and, as far as I can detect, a proposed 2010 CD release has not yet eventuated.

This LP features his 1977 live performance of the more popular songs appearing on his first three albums. The originals were studio produced with full sophisticated musical backing.  However, the live performance was very different allowing McClellan to amply display his considerable talent.  Other than for the one track where Graham Lowndes assists, McClellan performs solo accompanying himself very competently on acoustic guitar.  It is such a pity for music lovers that he did not have a more prolific output both as a performer and a song writer.

Link failed? Then please leave a comment or contact mr.stockman@gmail.com
Posted by Paul the Stockman at 3:57 PM