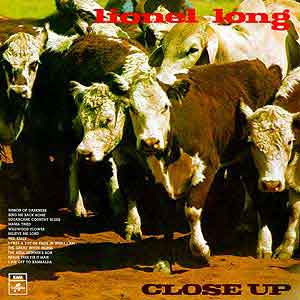 A somewhat mixed LP this one - not really country, not really folk and hardly a "close up" of the usual Lionel Long offerings.  And with a rather strange LP cover and rear having absolutely no bearing to the music, most of which is of American country and western origin, prominently by Merle Haggard so I guess it should be categorised as country but the overall production is certainly not country.

In my opinion, it definitely is not Lionel's best work.  I suspect that this might be why he broke with EMI after the production of this LP and, with Columbia, returned to his folk side. Still there are a couple of good tracks on this album with the standout being "Ned Kelly" by Shel Silverstein.  The tracks are "Ribbon of Darkness" (Gordon Lightfoot), Merle Haggard's "Sing me back Home"; "Mama Tried"; "I take a lot of Pride in What I am"; and "Shade Tree Fix-it-man", "Wildwood Flower" (Carter Family), "Ned Kelly" (Shel Silverstein), "The Great White Horse" (Buck Owens and L Scott), "The Mule Skinner's Son" (from Jimmy Rodgers and George Vaughan, "I am off to Kambalda" (Ken Neate), and two tracks composed by Lionel Long, namely, ""Sugarcane Country Blues", and "Believe me Lord".  Mary Jane Boyd performs with Lionel on "The Great White Horse" and assists with "I am off to Kambalda".

Link failed? Then please leave a comment or contact mr.stockman@gmail.com
Posted by Paul the Stockman at 8:44 PM