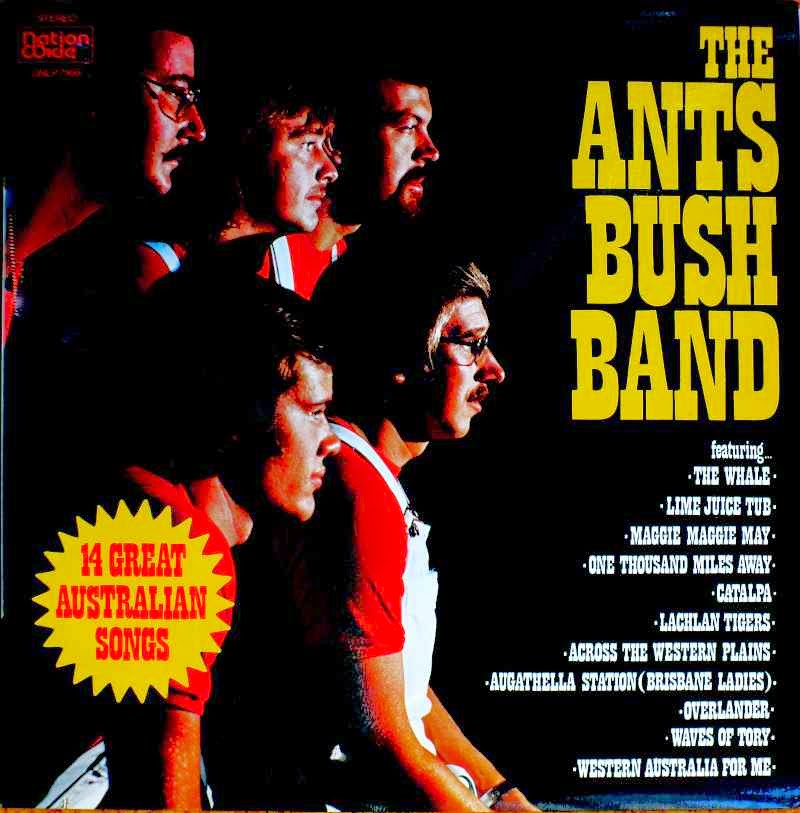 Probably one of the most requested tracks I get asked for is the the Ants Bush Band "The Whale" which is a "modern" folk classic inspired by Melville's "Moby Dick" It has previously appeared in one or two compilations on this blog. Anyway, Ian of Tassie has generously provided a rip of this album which features this song and many other Australian folk classics - both new and old.

This is a brilliant album demonstrating the fine musical skills of this well respected bush band which, unfortunately, did not have a large commercial output. Thanks Ian for providing this album. I have no doubt that it will prove to be very popular.

I have no idea as to when this album was issued. This Band operated from the '70s originally as the "Fabulous Ants Bush Band". Judging by the album cover, it might be a re-release but that's nothing more than base speculation. I'd love some concrete advice. (Additional - a blog visitor from Ireland has brought my attention to the fact that the identical album was sold as a cassette under the the band name "The Fabulous Ants Band" and the title "Tribute to 150 years Western Australia" and with the massively misleading claim "14 Great Western Australian Songs". The Sesquicentennial of WA was 1979 so that gives us a likely date of 1979 - perhaps 1978).

Sure, you can moderately criticise this album on the basis of some of the vocals but if you do not like this album, you are possibly on the wrong blog. I'd rank this as one of the better Australian folk albums by a bush band.

This album has a strong Western Australian focus which is refreshing (Well now we know why).

Band member Paul Duncan has now commented on this album. Click on the "Comments" tag below to read his interesting information.

Tracklist
1, Lachlan Tigers
2. Western Australia for Me
3. One Thousand Miles Away (Hurrah for the Roma Railway)
4. The Catalpa
5. The Overlanders
6. Augathella Station (Brisbane Ladies)
7. Waves of Tory (dance instrumental)
8. Maggie Maggie May
9. To the West
10. Across the Western Plains
11. Dennis O'Reilly (With my swag all on my shoulder)
12. The Whale (modern Australian folk classic)
13. Struggle in the West
14. Lime Juice Tub

Download with graphics - 64 Mb - MP3 VBR 192-225 Click here
Any problem with this or other links email mr.stockman@gmail.com

Posted by Paul the Stockman at 9:19 PM