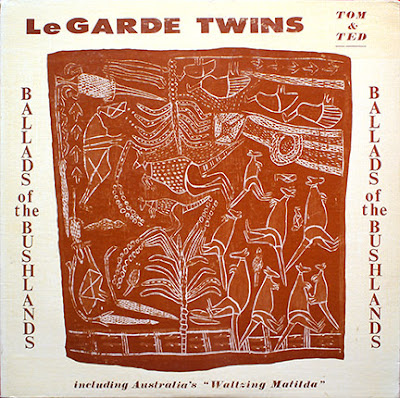 Tom and Ted LeGarde, identical twins, were born into a large sugarcane farming family near MacKay, Queensland, Australia in 1931. Apparently, they were inspired at an early age by both country music combined with Hopalong Cassidy films. At age 15, they either joined the rodeo circuit as "cowboys" or went west to become jackaroos. Possibly, both stories are pure fiction created to later provide greater credit as C&W singers especially in America.

By 1947, at the age of 16, they became part of the Buddy Williams  Wild West Show so they were obviously accomplished musicians by then. They also toured with other traveling shows often billed as the "Yodelling Stockmen". Such troupes always appeared at the major Agricultural Shows and  also the then limited rodeo circuit and selected country agricultural shows.

They signed with Rodeo Records from 1950 to 1952, and in the latter year they also signed up with a manager who reportedly help them to polish up their act and encouraged personal development. They went on to release a number of hit records with Regal Zonophone Records. In late 1954, they arranged to meet William Boyd, the Hopalong Cassidy actor, when he toured Australia. Boyd hired them to be part of his highly successful Australian tour. Boyd was to keep in touch with the twins which inspired them to try their luck in America.

They arrived in California in 1957 and, helped by their connections, they gained a reasonable degree of popularity. This featured album was produced in probably 1960 or 1961 and was directed at the American audience. The twins returned to Australia in 1963 with some limited success. In 1965, they again went to the USA and, from 1973, they began a three-year period with the Hilton Hotel in Las Vegas.

They continued with their involvement in the world of Country and Western Music in the USA up to 2010. If interested, google the "LeGarde Twins" to see a documentary and other information about them. Sadly, Ted LeGarde died in August 2018.

This album features 13 tracks; mostly  traditionals. I cannot identify when it was produced but, in 1960, there was a reel-to-reel tape release under the same same with 11 of the tracks. This LP added two further tracks, namely, their slightly modified version of Marie Cowan's 1910 version of "Waltzing Matilda" and the theme song from the 1957 film "Shiralee", supposedly a word meaning "burden" but the twins changed the title and their pronunciation  to "Sherilee".  I presume that they were mistaken. The film was an adaption from a D'Arcy Niland novel of the name. For those unfamiliar with the film, the central male character, played by Peter Finch, was a swagman traveling between different jobs and he ends up taking his young daughter, "Buster", on the track with him. She thus becomes his burden, of course, in a nice way as it turns out.

"Dreamtime for Jedda" is from the soundtrack of the 1954 film "Jedda".

We owe a vote of thanks to Ian of Tasmania for providing a good copy from this LP and its graphics. The LP was stereo and if you are wondering why the files are so small, it is because that the musical backing is just the guitars played by the twins - simple sound structure leads to smaller files.

This is an album collectible more for historical interest than great listening reasons but it has itrs charms. It has easily cleaned-up well.

Files not available? - message me mr.stockman@gmail.com
Posted by Paul the Stockman at 9:53 PM