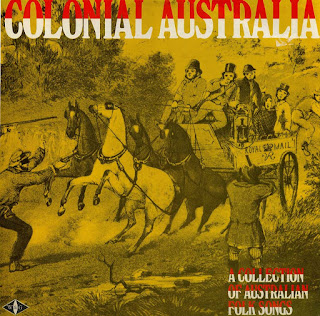 Subtitled "A collection of Australian folk songs. The rip and graphics were  provided by the Victorian Bush Folkie to whom we all owe a big vote of thanks.

I know nothing about this Judy Kenny other than the blurb on the rear of the album cover. To quote:-

"Judy Kenny is the daughter of an Anglican Clergyman. Although she was born in Croydon, Victoria, it was whilst living in Geelong that Judy came to the notice of W & G after winning a talent quest at High School which entitled her to an audition. For this, her first recording, we decided to add to our already comprehensive repertoire of Australian Folk Music of the Pioneer and Convict era."

Well, she obviously auditioned well enough to warrant her own album but as far as I know there was no second album.

Her voice demonstrates that she has had formal training as a classical singer and her diction is excellent. W & G demonstrably treated her seriously as evidenced by their providing serious folk music backing with Peter Hayes featuring strongly on banjo (Peter Daniel Hayes; Hayes Brothers, backing for various prominent fol and country singers). Alan Pope on bass, with Doug Wallace and  John Lane on guitars.

The album notes are fairly good with minor exceptions. "Convict Maid" was a London broadside and was also available in Ireland as identified by Ron Edwards. Despite assurances that the version of "The banks of the Condamine" is the rarer horse breaker version, it is most definitely the shearing version - I guess someone had a bad day! Ben Hall died in a battle?? As I understand it he never had the opportunity to fight back - first shot a few times while he was asleep and finished off when he futilely tried to run away despite his injuries.

For its age, the record was in very good condition. Graphics are included.

Posted by Paul the Stockman at 3:09 PM